Whenever I’m in Vegas, I can’t help but envision its past… I’m not saying I want to be in the Las Vegas of the past; but visiting it in my mind is somehow very romantic… One way to safely be there is via books like The Green Felt Jungle:

The Green Felt Jungle, “The shocking documented truth about Las Vegas — told for the first time in this controversial best seller that blasts the lid off the fabulous ‘entertainment capital of the world’ and lays bare a corrupt jungle of iniquity.”

By Ovid Demaris (a former United Press correspondent and newspaper reporter, who wrote more than twenty books and hundreds of newspaper articles, most known for his Mafia exposes and biographies) and Ed Reid (who won a Pulitzer in 1951 for his investigations into Brooklyn organized crime).

Contains black & white photos in the center of the book, primarily of mobsters, gangsters, and Mafia folks — including grizzly crime scene photos.

Covers the history of Las Vegas, from founding to the early 1960s. Mafia, murder, mayhem all set back in the day. 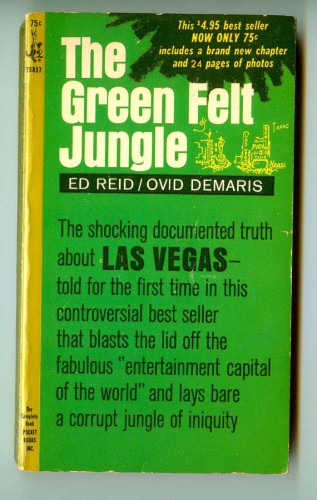