Addictions: The Fix Is In?

As a follow-up to my post on behavioral addictions… 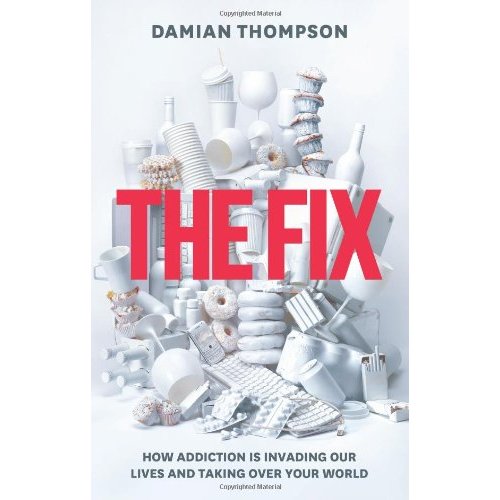 In his new book, The Fix, Damian Thompson argues that “the line between consumption, habit and addiction is becoming dangerously blurred.”

When future generations look back at the early 21st century, they may well decide that its political turmoil — the collapse of the euro, the spread of Islam, the rise of China — pales into insignificance next to a far more important development: a fundamental change in the relationship between human beings and their social environment.

This was the moment in history, they may conclude, when our species mastered the art of manipulating its brain chemistry to produce intense bursts of short-term pleasure. As a result, billions of people began to have more fun than their minds and bodies could handle — and developed insidious, life-sapping addictions. I did so myself.

Already, the distinction between ‘addicts’ and ordinary people is far less clear than it was even 20 years ago.

I’ve not read the book, but it seems rather alarmist, really.

The physical biology of humans hasn’t even fully caught up to the changes of agriculture, let alone the industrial age; and I’m supposed to believe that the digital age is destroying us all?

Just as the digital age has increased the ease of access and pleasures, so has it made finding help easier. …Maybe Thompson should look up a generation in his family tree and see what genetic connections he has to addictions.

There are others, like Professor Marina Bianchi, who do not see consumption or access as inherently problematic:

Clearly there can be excess in the consumption of things as there can be in the imbibing of food or drink. But it is un-reflective to take the pursuit of variety and change, as in fashion, as due only to a search for status, or to jump from observing careless or wasteful consumption to calling for a new era of frugality and restraint. I do not see consumption as an activity that destroys rather than creates and production as something nobler.

It is true that in order to be more enjoyable and creative consumption must be skilled consumption: you must know the goods and experiences you are consuming. But, the more consumption will be thought of as inferior or wasteful, the less prepared we will be in acquiring the skills necessary for creative consumption. Fortunately things are changing, and fast. The communities of interacting consumers that form through the internet in a variety of new and ingenious ways are very important for the creation of skilled consumers. And in many ways we see them leading producers and opening up new potential for living lives of satisfaction.

1 Response to Addictions: The Fix Is In?