Men, Casinos Are Betting The Pretty Employees Will Screw You Out Of Your Money

I would like to draw your attention to a pair of studies done regarding men’s reactions to pretty and scantily clad women.

In the 2003 study, the finding were that “pretty ladies make men want wealth with which to impress”, taking less money right in the moment rather than waiting for more money later.

After eyeballing pictures of pretty women, men were more likely to want immediate monetary gratification than to wait for a bigger bonus. Women’s calculations, on the other hand, were unaffected by male eye candy, as were men’s after ogling plainer women or fancy cars.

What surprised me most about this study, wasn’t the “smarter” reaction of women — but rather that women were included in this study at all, and that when they were, the women were shown sexy men (as opposed to the usual showing women photos of sexy women). Sadly, however, this isn’t going to get us the beefcake marketing that at least some of us want. 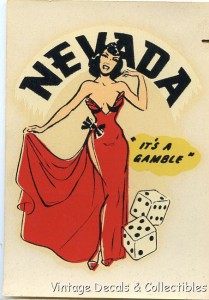 In the second study, from 2006, men — especially those with higher levels of testosterone — who fondled lingerie and/or were shown pictures of women bikinis were also said to have impacted men’s thinking in terms of money and bargaining. However, as this other article makes very clear, such arousal may actually have made men more rational and better deal makers.

The bottom line here: while men are most certainly motivated by women and sex, sexy women do not necessarily make men foolish with their money. Perhaps a little greedier in the moment, a little more prone to instantaneous cash; but not idiots.

However you look at this though, the house certainly wins.

Those men winning at gambling are far likelier to leave the tables in pursuit of, well, you know. *wink* Whether that makes them follow their women around while she shops, or search for companionship with strangers, these men are willing to head up to their hotel rooms. Whatever and whomever these men pursue, those winning are far likelier to leave the casino, taking their winnings — and their winning streaks — with them.

Men losing, however, may stay at the tables far longer than they should, just praying for Lady Luck to show up. They continue to stay, desperate to win at least a little bit, so that they can have something in their pockets to impress the ladies.

Even if a man knows he can’t take the sexy casino waitress up to his room, a guy can — and will — dream. And that just helps the house.

Image of vintage Miss Nevada decal from (and for sale by

A very sexy Miss NEVADA is dressed in her risque long red dress and throwing a lucky seven on this one-of-a-kind souvenir water decal, among the best there is when it comes to sexy pin up art!

Produced in the early 1940’s, this risque water decal is part of a set of Miss America decals that were popular at that time, but are very rare today.

2 Responses to Men, Casinos Are Betting The Pretty Employees Will Screw You Out Of Your Money