Casinos Are Counting On You Not To Do The Math

Since part of the reason I wanted to blog about gambling was to take the time to examine the myths surrounding it, be it games of chance or games of skill, I thought I should start with this whole idea of card counting.

When it comes to talking about playing poker and many other card games, the subject of card counting comes up. I’m not really a poker player — frankly this whole card counting business professed by card sharks and nerdy math types is what’s kept me away from it for so many years. I suspect this is true for many other women as well. 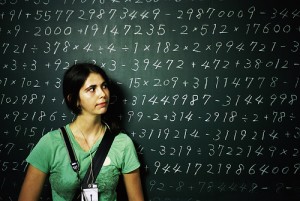 I don’t say that because I subscribe to the “women are bad at math” notion (far from it!), but I’m pretty sure that most women are intimidated by the idea of counting cards. But really, we shouldn’t be.

When it comes to numbers, most women have a pretty good head for them. Historically, we’ve been the ones in charge of household budgets, which is much cold numbers and hard math as it is any sense of thrift. And we can master the mystery and importance of numbers that men are daunted by; thread count on sheets and bedding and the desirability of stocking deniers, for example.

Still, we women tend to dismiss ourselves when it comes to math.

I think a large part of this soft-fuzzy-female-math-feeling has a lot to do with notions about female intuition (more on that in future posts, I assure you!), greater female interest in more “organic” areas of study, and the connotations surrounding math.

Numbers are rarely ever just numbers. Usually numbers are answers to questions. Any statistician will tell you that numbers can lie; any poll-taker can confirm that the questions themselves are loaded. Case in point, the dreaded relationship question, “How many sexual partners have you had?”

We all know that men increase their numbers to this question, while women typically decrease theirs. Up until recently this has been a given to assist in preserving the fragile male ego and gender constructs about morality. But the September/October 2009 issue of Psychology Today sheds some new light on the phenomenon which might assist us in matters of card counting.

In Can I Get Your Number? Jay Dixit examines how men and women differently arrive at their count of former sexual partners. In the article, Dixit quotes Norman Brown, a psychologist at the University of Alberta, as saying it’s not simply a matter of lying: “It has to do with self-presentation, estimation, and memory.”

While I won’t underestimate the depths we’ll go to as a society to preserve and strengthen male egos, it seems our approaches to math and memory are quite different. And here’s the key:

Women are more likely to “just know,” or to have a tally somewhere, a method psychologists call “notches on the bedpost.” Women are also more likely to use enumeration (“Let’s see, Dave, Tarik, that guy from the gym…”), which produces underestimates, since people forget instances.

Men are more likely to use rough approximation (“Jeeze, I don’t know, like maybe 50?”) or rate-based estimates (“Let’s see, one a month for the past five years…”) — a method that produces overestimates. 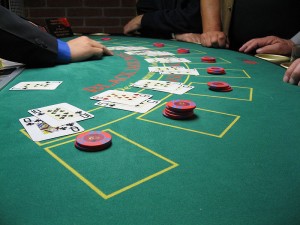 What does this mean for those who want to win at blackjack or another card game? It means we have to use actual math here — to train ourselves to reply on actual route memorization, not the soft-fuzzy forms of counting we are used to.

That’s good news! Just as we’ve mastered being ruthless with our checking account registers, learned how to maximize the dollars and cents of sales and coupons clipping, we can learn how to count cards. (And it’s just as legal to count cards as it is to save money!)

Counting cards is the way to win at blackjack and other card games.  If you want to win, GameMaster has 24 free blackjack lessons that will take you through playing blackjack — including how to count cards. Wikipedia also has some card counting basics with a good reference link section too.