I should probably start here with a clarification of the use of the word “kitty” as I’ll be using it a lot here, and in varying ways.

Strictly speaking, most gamblers know a kitty as the money in “the pot,” the funds or stakes up for grabs in the game. This why you’ll often find those black cats in the center of vintage rummy game trays and mats.

The word kitty is also used to mean the collection of cash between several people, not necessarily at stake in a game of chance. (You might be more familiar with this at the office when it’s time for everyone in the office to chip in and buy Becky a gift for her new baby; all the money is put in a kitty and one lucky sap gets to go buy the best gift they can with the funds in the kitty.)

But the word “kitty” is used in my circle of gaming girls to mean other things too.

As my grandma told me, years ago housewives would stash bits of cash around the house. Because often the little woman didn’t have access to the bank or was simply given a cash budget to work within, there was the usual cash kept for household expenses (typically kept in a desk drawer in the kitchen or in a coffee can in a cabinet), but housewives also kept secret stashes of other money too…

Money saved on household expenses, money left-over from last month’s budget, etc., was kept not only for unexpected emergencies but for little splurges, such as fabric for a new dress for Bonnie to go to the dance in, for Bobby’s costume for the play, etc. (Gran says this money was for the family, but kept in secret so that the monthly budget wouldn’t be decreased.)

And housewives of yesteryear also managed to stash a little mad money for themselves too.

This too was made up from the money they managed to save on regular household expenses, but it also included — GASP! — money she won in card games with the girls. 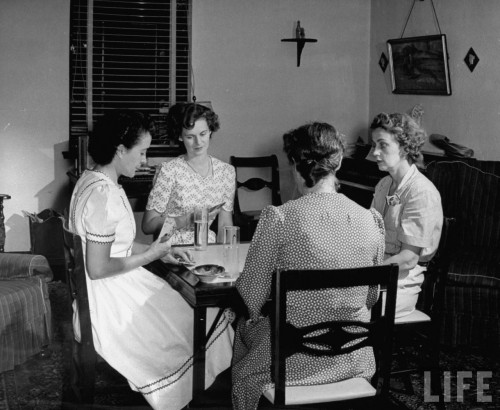 Card games, such as Bridge, Canasta and the myriad forms of Rummy, were not just the stuff atomic couples played; ladies played them too. And points and bragging rights weren’t the only things up for grabs. Often each point was a penny (or higher, depending on the circle), and ladies would make sure they had enough in their own secret stashes of cash to be able to play the weekly game. This money was often called a lady’s kitty.

A woman kept a separate kitty for each game or circle of friends she was a part of. This was not only a practical matter of budgeting one’s money, but it was also deemed in poor taste to bring a billfold of dollar bills to a penny-a-point game. The more games a lady was part of, the more kitties she had. Each kitty was generally kept hidden at home; a coffee can on a pantry shelf, an envelope tucked into a drawer of dainties, a little jar in the closet, etc. But kitties were never carried about in such containers. Each kitty had a corresponding coin purse that went to the games. Not only would a jar or can be seen as poor manners, but a lady wouldn’t ever tip her hand by showing the depths of her pockets. (Or a lack thereof.) Gran says each woman’s little gambling kitty coin purse was like her calling card; you could immediately recognize who was at the game by the little coin purses laying at an empty table.

Gran estimates that back in the day, she had as many as a dozen ongoing games – and kitty purses to match.

(This prompts me to rethink that old line about crazy little old ladies with a house full of cats! …What if each “cat” was actually a coin-purse-kitty of cash?!)

Sometimes too, the money in the pot was recycled; the winnings went back into a kitty that, once it reached its goal, would be spent on a little event for the ladies. Perhaps a luncheon at a club; maybe travel money for busing to a card or bingo event one town over. Whatever the ladies in the game agreed upon. In my group, we do this too. (I’ll be posting more about how to organize one of those later.)

In any case, I myself, and the girls in my gambling circles, have adopted the use of the term “kitty” to mean multiple things: a gambling pot, shared collections of money, our individual secret cash stashes, our little coin purses. It may seem confusing at the start, but I’m betting you’ll catch on quick enough.

This entry was posted in Dames, Games and tagged essentials, etiquette, history, save money for your kitty, terms, your kitty. Bookmark the permalink.