Dames Of Chance: An Interview With Laura Brown

Laura Brown is a fellow writer who produces Word Grrls, a site for writers looking for extra help, inspiration, and creativity. And, it turns out, Laura’s another card player with a gambling spirit. 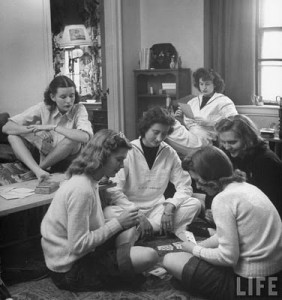 I do like to play cards games. With my brother and sisters I would play simple games like Crazy Eights and Bloody Knuckles. I was the one who organized the games and kept things peaceful, more or less. My brother, being the only guy with three sisters, didn’t like to lose. But, it was my middle sister who gave him the most competition, she loved to win.

Bloody Knuckles was a game played with three cards in your hand. It was kind of like Crazy Eights but the idea was to get your score as low as possible before someone else knocked on the table (making everyone stop and show their cards). Highest score would have their knuckles whacked with the edge of the deck of cards. I don’t remember all the rules for that game but jacks were zero and the other face cards were ten, the ace was one.

What other games did you play?

I liked playing poker and black jack with my brother and sisters. But, that was never a successful game for four kids. I never could remember what beats what and my sister (I always thought) would change the rules to her advantage. Our littlest sister needed help playing. My brother and sister wanted to play for real money. I knew that would never work for me. I loved to take the risk and see how far I could go before I went bust. Mostly, I just didn’t like leaving that road not taken when it came to making the decision to stay or try one more card.

What card games did you play with the rest of your family?

We would play Euchre with my Grandmother when all the family came for dinner around family holidays. I miss her and those Euchre games. Recently we played Euchre with family – but it felt a bit sad to me. It was so much her game, there is so much of her and memories of her all tied up in that game for me.

What card games do you play now?

Now I usually play cards with my Mother when we get together in the evening. She is out in her garden most of the day and then likes to do something other than just watch TV at night. So we play Canasta and games kind of like that which she has picked up while she lives in Florida over the winter months. I like Canasta, it’s pretty simple to pick up and even when I haven’t played in awhile I get back into the swing of it pretty easily.

Do you gamble — play for pennies or nickles anything?

We tried playing for pennies but while my brother always had money for that, my sister and I never had enough.

As a writer, what do you think is the biggest gamble you have taken?

Just sticking with it this long is a gamble. I feel I’m playing against myself. I’m not making myself rich and it gets hard to stick with it. But, I love to write, to expand on new ideas and find new ideas. The highlight to my day is finding something new I’d never heard of before and then researching more until I’ve found user groups, networks, societies, art galleries, and so on. I enjoy the hunt for information.

The gamble is in time management. I tend to get a lot of ideas, spread myself thin and then not really get anything completely done. This is how I can work against myself. At the end of the day I’ve had a great day but I haven’t made any money. Which sounds so commercial – but someone has to pay the bills and there’s only me sitting here to do that.

What would it take for you to feel you have won in your gamble to be a writer online?

If I had money in the bank after I’ve paid the bills, bought groceries and all the other standard stuff that needs to get paid then I feel I’ve got a winning month. A lot of people I know would not think of that as a win. But, right now that works for me. If things pick up I might grow my standards and expect more.

Or, if I had a staff writing job somewhere. That would be a dependable income, at least more than you can count on from freelancing where you have to find clients and live contract to contract.

Laura is not only the web producer of Word Grrls; she also runs Green Living History and the ASCII Art Bazaar and is one half of UP to the DL. Laura can also be found on Twitter @thatgrrl.